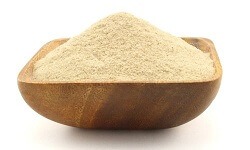 Xanthan gum is a polysaccharide comprising Glucose, Mannose, and Glucuronic acid molecules. In the food industry, Xanthan gum is commonly used as a food additive, thickening agent, and stabilizer. Xanthan gum can be derived from various sources, such as Corn, Wheat & Soy. The greater the weight ratio of Xanthan gum added, the thicker the liquid will become. In general, 0.2% by weight of Xanthan gum is added, and too much xanthan gum can result in an unpleasant and undesirable slimy texture. Xanthan gum is effectively stable in various viscosities, temperatures, and pH levels.

Xanthan gum is produced by the fermentation of Glucose, Sucrose, and Lactose. The polysaccharide is precipitated from a growth medium with isopropyl alcohol and ground into a fine powder in the fermentation process. Fine powder medium is added to a liquid medium to form the gum. Xanthan gum is produced industrially by inoculating a sterile aqueous solution of carbohydrate(s), a source of nitrogen, dipotassium phosphate, and some trace elements. After fermentation, the polymer is precipitated from the medium by adding Isopropyl alcohol.

Xanthan gum is widely used as a food additive in the food industry. It is used as a thickener to maintain the viscosity of pastry fillings. It prevents the water from seeping out and soaking the dough, thus protecting the crust's crispness. Xanthan gum is also used in ice creams to prevent the formation of ice crystals. It is mainly used in ice creams to maintain a pleasant texture. Xanthan gum is used in most frozen foods and beverages. It is also used in egg substitutes made from egg whites to replace the fat and emulsifiers found in yolks. It is even used in food applications such as salad dressings, sauces, instant products, desserts, bakery dairy products, and fruit juices, as well as in forming various low-calorie foods.